Spring has come to the Blue Ridge Mountains, and with it, the bears have come out from their Winter naps, hungry. Humans have a tendency to be careless with such tempting things as bird feeders and garbage. The bears are not stupid. They were here first and are quite happy to take advantage of the bounties we unwittingly provide.

I gave up on using hanging bird feeders a couple of years ago, even with bringing them in at night, since the bears figured out to come for them before that. Now, I put the bird seed out on the ground and some rock walls of planter beds. The birds don’t mind and the squirrels and chipmunks are happy, but the bears would like it too. I tried setting out feeders there, but the bears could dee them from the gate and took that as an invitation.

Now, with the gate closed, if a bear or bear family comes to the gate, as a mother and three yearling cubs did last week, they can’t really see the food and I can make noise and let them know to move on. But, there are other ways in, other places to climb over the fence (6 foot, chain link). Friday evening a mother with one yearling cub did just that and began to clean up the bird seed. I was prepared. I had a long section of aluminum pipe that makes a very satisfying clanging noise when thrown out the door onto the stone patio, and a metal trash can lid that does the same. Those got them moving back the way they came. I had to continue the noise from an upper balcony facing that way by banging two boards together. Mama got the message fairly quickly, but the youngster seemed confused and took longer. I think, perhaps that one is not a genius among bears.

About an hour later, they came back. I tossed out my noise makers and they ran from the bird seed place, but not back the way they came. Instead, they went toward the gate and sat in the bushes off to the side and waited. I continued to make noise. They stayed put. After a while Mama came out and headed back to the food, but was discouraged by increased noise and showed some agitation. As it was getting dark, I got out a spotlight. She didn’t like that either. After about an hour of this, she finally gave up and climbed over the gate and out. She climbed it at the hinge side, which means I didn’t hae to fix the alignment as I have when a bear went by the middle. She sat across the driveway and waited for junior. I could tell that because I could see her eye shine with the spotlight.

Junior was confused again. I don’t know why he or she didn’t want to go over the gate, Maybe it felt to exposed. Maybe just stubborn. It too another half hour of me keeping up the noise before I heard him/her going over among the bushes down the fence line. By then it was full dark. Bears are not night creatures. I think it is because their night vision is not much better than ours. That’s a good thing. They would be truly invisible, which could lead to some nasty surprises for all concerned.

Saturday, I gave thought to further measures I could take to persuade this pair that my yard is not a good place to visit. I didn’t put out the usual ration of bird seed and hosed off the leftovers on the rocks. The other critters spent the day cleaning up odds and ends. I kept the hose handy on the porch and considered what I might have around to make a more impressive noise. I remembered the electric leaf blower. Its loud and there are probably some frequencies there that they can hear which I can’t. I know the dog hated it. And, it could blow stuff at them. So, I got that handy. Then I thought of something really noisy. The Lock/Unlock clicker for the car has a Panic Button feature. “Ha!” thought I, and brought the car in the yard to near the bird seed place. 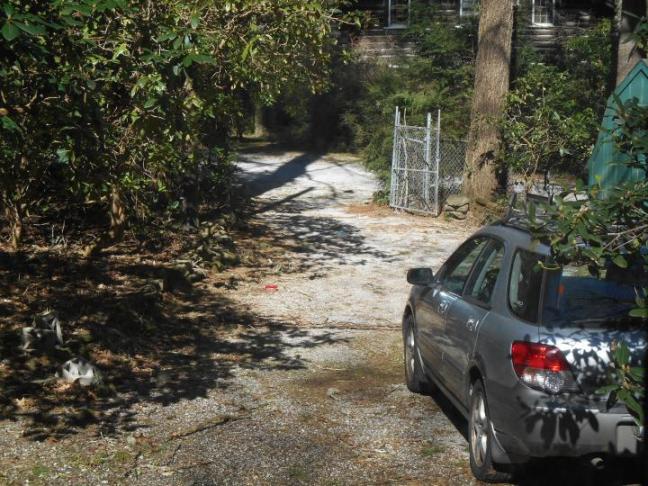 They were back that evening. As soon as Mama began to sniff at where she expected food, I pushed the Panic Button. The horn honked. The lights flashed. The bears ran back the way they came and were shortly over the fence and away. They did not come back that night. They did not come Sunday night, but that could be for other reasons. The garbage pickup in the neighborhood is Monday morning. Some people, either weekend visitors or those who don’t want to get up and dressed to take the garbage out in the morning, put it out Sunday evening. The bears enjoy that.

Finally, I am coming to the real point of the story. Two things have been customary at this house for a long time, decades even. One has been parking the car in the garage shed of the house next door, which is a long way from the front door. The other has been keeping the gate closed unless there was an immediate reason to open it. The fence and the gate have never kept the bears out if they decided to come in. They make it a bit more of a decision, but no serious obstacle. Parking the car in the yard (the area is intended as a driveway) is convenient, especially when I have to bring in the weekly 50 pound bag of sunflower seed. And, I like having the gate open.

Its odd that it took an ornery old mama bear to get me to notice that. The main reason for keeping it closed died with my Dad’s old dog almost two years ago, but I kept it closed out of habit. Now, having it open feels better, a feeling that is resonating in some larger way. So, my gate is open, whatever that may come to mean.

6 thoughts on “THE BEARS, THE CAR, AND THE GATE”